There’s a story I once heard of two students. As a rule, Freshers are prone to get into all kinds of antics in the early terms of their university experience. Robert and Beth had only known each other for a couple of months, but had quickly discovered common ground through the TV show Spaced, playing with cameras, hating Abba, and a mutual admission that they weren’t interested in having sex with each other, but felt a kind of instinctive playground kinship.

And on a numb February afternoon they found themselves staring up at today’s playground. It was a risky choice. The abandoned factory on the edge of their campus was notorious for squatters and general unpleasantness, and yet it had lingered in the attention of both of them, igniting imaginations and conversations between them over late night pints of bitter in grubby pubs. Drunken bets had finally manifested real plans for exploration, and so they tip-toed swiftly toward the broken fence swinging its forlorn sign ‘Trespassers will be prosecuted’. Checking this way and that for security or gawkers, they leapt over debris and crept through the shattered fire exit doors.

Once inside, they slipped their packs from their shoulders and began to assemble their cameras in the gloom. ‘This place really is a dump, hey?’ said Beth, nervously eyeing the steel girders and spikes standing stark, protruding a foot above the concrete floors. Robert grunted passively from his crouched position and finished testing the shutter on his camera. With camera straps secured around necks, their freezing feet began to carefully pick their way around obstacles as they progressed through gutted offices and yards of insulation dangling from the ceiling.

They finally found a sound-looking staircase with no steps missing, and – after a little deliberation – made it to the middle level. After long minutes of stuffy darkness, walking into the hall forced their widened pupils to shrink suddenly and it took some moments for their eyes to process the scene that then left them speechless. The slant of the afternoon light peeled wide across the bare floors through the tall, broken and distorted windows which lined the walls, illuminating every shape in the room in a pale, jagged, golden glory. It was like walking into a room lined with tiny diamonds. Like a sparse, yet elaborate set for a play, every detail looked as though it belonged there.

Viewfinders were slowly, reverently, raised to eyes… and the precious pictures never made it to Facebook. The friends took shot after shot until the light faded, still finding more treasures to frame, leaving the factory too quietly full inside for easy speech.

They went in expecting amusement, but found beauty instead.

This is often the discovery of the student minister. We are those whose age is just passed that of university. Our experiences are still fresh in our minds, but we have had time enough to reflect and learn from them, so we know where the struggles lie. Everywhere the students go, we must also be prepared to go. By many people’s ‘minister’ standards, we student ministers are like the church’s heretical (sometimes ostracised) younger sibling. Our methods are sometimes unorthodox, irreverent, unexpected and often hilarious, but our goal is always the same: to break into the ‘burnt out’ and to find the beauty God placed inside of them that they didn’t know was there.

I have been a novice with the Northumbria Community for four years. I stumbled into them five years ago via one of God’s wild goose chases, and if I have learned anything at all from those it is that you should pay attention to people who have the gumption to say out loud the things your heart has been whispering through long sleepless nights. The Northumbrian rule for living fitted the shape and the direction of those whispers, and never did I need the rule more than my past two years of student ministry.

Some might call the rule a ‘mission statement’, which I guess you can if it floats your boat, but I don’t care much for the term. I prefer to use the term ‘agreement’. The rule is a composite of the things the members of the Northumbria Community agree are of high importance, despite discomfort or inconvenience. And where student ministry is concerned, this was the phrase that rang out, day after day:

We embrace the responsibility of…

… making relationships the priority, and not reputation.[1]

Translation: earn the right to be heard by these students by giving them your time, your love, your ears. Your motive should never be to angle for their conversion or to ease your own religious conscience, but to offer them the chance every human being deserves of experiencing the love of Christ – in this case through the way you demonstrate love to them.

One particular student summed this message up when they turned to me, during a sleepy mid-afternoon discussion, paused and said: ‘You’re one of the few people who make me feel like it’s okay to be me.’

This was not really much to do with things I had said to them. Living the Northumbrian rule gave me the ears to listen to what the students weren’t saying just as much as what they were. It also gave me the eyes to see life-blood pumping through the abstract concept of the Resurrection, as I saw realisations of love dawning on them in a hundred tiny ways every day.

Therein lies the hope of illuminating the empty, forgotten room within. There is the hope of a love which is simply about who you are, and not what you do. I had heard this idea discussed in witty sermons and in countless trendy books but I never really understood until I stayed out all night with the students I had awkwardly befriended, clubbed with, pub-bed with, smoked with, made coffee and eggs with, laughed riotously with and (sometimes) studied with, huddled in blankets in squalid houses with no heating.

Christ in us, the hope of glory.

Jenny Bulcraig divides her time between Birmingham and London. Although initially a little by accident, Jenny has been ministering to students for over six years. Alongside her now completed Theology degree, Jenny has been studying with the Northumbria Community for four years and is expected to complete her Novitiate in 2013. Jenny is also a visual artist, musician, sometime arts-critic and general creative handy-woman: dabbling in pop-up exhibitions, spoken-word collectives, and project management. She's extremely fond of Twitter - although 'just friends' with Facebook - likes kazoos, Wellington boots, and consuming a cup of tea with a good book.

A Rapid Response to Faith without Borders by Babatunde Adedibu

View all posts by Jenny Bulcraig →

Building Trust: How Come You Guys Don’t Give Up On Us? 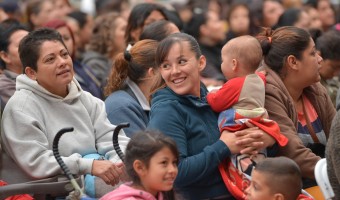